If pictures and video clips should be presented on large screens, a single display or projector is often insufficient. Video walls consisting of multiple rear-projection cubes, small bezel displays, projectors or LED modules should then be used. One video processor takes over the depiction of the picture content as a harmonic overall picture through the individual components.

What is to be considered?

Split computers as manufactured by RGB Spectrum have been developed primarily for video walls consisting of rear-projection cubes and Steglos monitors. Split computers use the full, native resolution of the playback devices. So that the overall impression of the picture first, then edge-blending technique is used. The Mediawall projector group from RGB Spectrum provides a number of variations with diverse numbers of inputs for the input of various signal formats and outputs depending on the number of playback components. 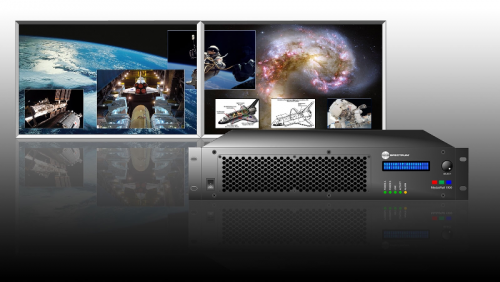 Which applications can be considered?

The simple operation of multiple PCs or workstations via a KVM system complements the visual representation.

Syscomtec markets split computers from the following manufacturers: CYP easescreen and RGB Spectrum. Syscomtec provides a broad selection of models of split computers in the Mediawall series to their retailers at exceptional conditions.

Which system is the right one for my application?

Our highly qualified marketing department will help with the selection of the appropriate split computers. Our technical support staff will support our partners with the planning and installation of the system. The most popular split computers can be delivered quickly. A demonstration of the RGB Spectrum equipment can be arranged by prior agreement.

Which products are available?

Which manufactures are there?